Waterfront gardens, transforming a former high school and a new leisure and wellbeing centre are among the projects in Northern Ireland awarded a share of £2.1 billion from the UK Government’s landmark Levelling Up Fund.

A total of 10 projects in Northern Ireland have been allocated more than £71 million from round two of the government’s Levelling Up Fund. The projects will create jobs, drive economic growth, help restore people’s pride in the places where they live and spread opportunity more equally.

This will drive forward the Prime Minister’s priority to grow the economy by levelling up and provide the foundations for building a better future in communities across the UK. By working together the UK is better able to collectively tackle the individual challenges faced by every region and nation across the country.

There is also £20 million to create a new leisure and wellbeing centre in Enniskillen, £9 million to regenerate Maghera including transforming the former high school into a new industrial park to boost local business, and £4 million to rescue Belfast’s beloved art-deco Strand Picturehouse.

“Through greater investment in local areas, we can grow the economy, create good jobs and spread opportunity everywhere.

“That’s why we are backing a number of projects with new transformational funding to level up local communities in Northern Ireland.

“By reaching even more parts of the country than before, we will build a future of optimism and pride in people’s lives and the places they call home.”

“We are firing the starting gun on more than a hundred transformational projects in every corner of the UK that will revitalise communities that have historically been overlooked but are bursting with potential.

“This new funding will create jobs, drive economic growth, and help to restore local pride. We are delivering on the people’s priorities, levelling up across the UK to ensure that no matter where you are from, you can go as far as your talents will take you.”

“From regeneration in Maghera to a brand new wellbeing centre in Enniskillen, the UK Government’s Levelling Up Fund continues to deliver across Northern Ireland.

“This latest round of the fund will see £71m invested in local infrastructure projects to support economic growth, drive regeneration, help deliver net zero and boost pride in place.

“Building on the £49m already invested from round one of the Levelling Up Fund, this is a fantastic outcome for communities here.”

The major investment announced today follows the allocation of £1.7 billion to 105 projects from round one of the Levelling Up Fund in 2021– taking the total allocated so far from the fund to £3.8 billion.

The Government has also confirmed there will be a further round of the Levelling Up Fund, providing more opportunity to level up places across the UK. 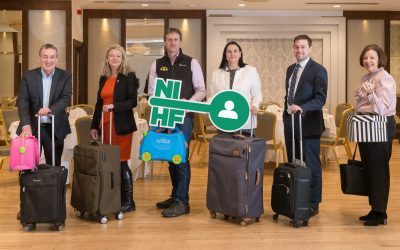 Nominations are now open for Receptionist of the Year, Most Promising Receptionist and Reception Team of the Year   It’s time to check in for the NIHF Receptionist Awards which return after a three-year break.   The Northern Ireland Hotels Federation (NIHF)...

Portrush restaurant refurb is part of £1.5m investment plans for The White House

The White House in Portrush is moving forward with the next stage of their development programme, focusing on the refurbishment of their Trocadero Restaurant.   The restaurant space will temporarily close until March 31 to allow the network of local trade... 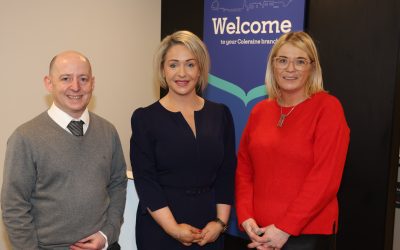 Eighrean Horner, Bank of Ireland Coleraine Branch Manager, recently welcomed customers and representatives from local community and business organisations to take a tour of the newly modernised branch followed by a reception, part of a £7m investment in branches and...